Women Working Offshore Encourage Others to Come Aboard 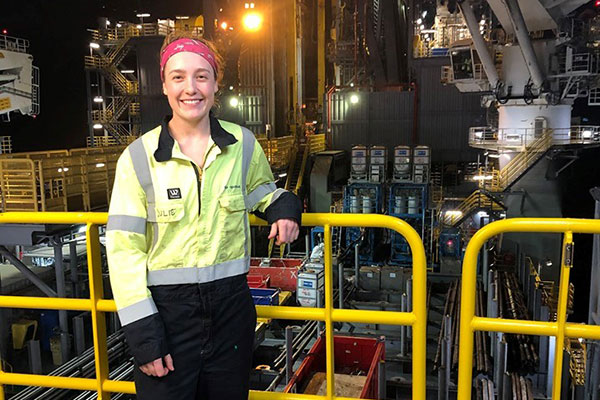 While the oil and gas industry workforce is predominantly made up of men, more women are choosing a rewarding career offshore now than ever before. Two Transocean employees are offering their perspectives on what it is like for women working out on the water. One helped pave the way for women in the industry, the other set foot on a rig for the first time not too long ago. Their journeys are different, but each has found their stride in this pioneering industry and is encouraging more women to take advantage of the exciting opportunities offered offshore.

Julie Mall is a 3rd engineer on the Deepwater Proteus in the Gulf of Mexico. She began her career with Transocean in April of 2018, and she is the first member of her family to work in exploration and production.

“I wanted a job where it wouldn’t just be the same thing day-in and day-out, and I could be using my hands,” said Mall. “Working offshore definitely fits that mold. Every day is a little different, and there is always something to learn.”

Mall is one of a number of women working on board the Deepwater Proteus.

“It’s pretty cool. Even though we’re not all in the same department and working directly with each other,” said Mall, “it’s nice to have someone to talk to and see how their day is going. The guys that you work with are great and everything, but it’s nice to have another female’s perspective.”

Stacey Earley knows what it is like to be the only woman on a rig. She has more than 37 years of experience in the oil and gas industry and has seen it undergo some major transformations. Earley is now the Director of Marketing Contracts and Services at Transocean, where she has worked for 14 years.

Earley grew up in north Texas and studied civil engineering at Massachusetts Institute of Technology (MIT) from 1978 – 1980, before deciding to study petroleum engineering at Texas A&M University from 1980 – 1983.

“It was everything I thought it was going to be,” said Earley. “It was pioneering. We were so new at the time, that we only had one textbook. Everything else the professors handwrote.”

During her first summer at Texas A&M, she needed a job to pay for her classes and “got lucky.” A division manager at an oil and gas company had just created a program to hire women studying petroleum engineering to go offshore.

“His daughter was in petroleum engineering two years ahead of me. He wanted to prove that women could do anything,” said Earley.

Earley was chosen and went to work as a roustabout on a production platform. When she graduated in 1983, that internship materialized into a job offer. She was only the second female engineer the company had ever hired and excitedly went to work on a small platform rig as the night company man. Earley was the only woman out there.

“I decided, well, I’m just going to do my job. And as long as I do my job, and I’m all business when I’m down there doing it, then they’ll come to realize it. And they did. It took a little time, but they did,” said Earley.

She worked on offshore rigs for almost four years, until the infamous 1986 crude oil collapse. Earley, like so many others, was laid off, but she had a plan. She had already applied to Tulane University and received a full scholarship. After obtaining her MBA, she worked for a super major in drilling and planning for 17 years before joining Transocean in 2006.

Throughout her rich career in the industry, some of the biggest changes she has seen are improvements in safety and technology. Another change is women rising to operations manager positions – something she did not see while working during the ‘80s, ‘90s and early 2000s.

“What I saw when I looked around was that the people who were the managers and supervisors of drilling, none of them were women,” said Earley. “What I saw at that time was that women were sidelined from operations. So, they found ways to move up in services fields like permitting, environmental, or HR.”

Transocean recruits competent, talented, and qualified individuals for roles throughout the organization and currently has a particular emphasis on identifying candidates who are women for roles in operational tracks; in addition, the company looks for opportunities to cross-train high potential employees with interests in operations. The company also sends recruiters to universities, maritime and military career fairs, and industry conferences to encourage women to pursue careers offshore. Transocean strives to create a workplace environment supportive of women and men by offering excellent career and development opportunities as well as competitive benefits packages.

Having enjoyed such an exciting and fulfilling career herself, Earley would love to see more women join the industry. She is Sections and Chapters Chair of the Society of Petroleum Engineers WIN (Women In eNergy) committee, where she inspires and encourages women to follow in her footsteps.

“I love it. It’s fun. It’s pioneering. It’s dynamic. Whether you’re offshore or you’re on land, it’s just a fun industry to be in,” said Earley.

Transocean is committed to fostering a diverse, inclusive global workforce. As a relatively new hire at Transocean, Julie Mall offered her perspective on women working offshore.

“I think that things are really great the way they are now. I have always felt accepted and respected by everyone out there,” said Mall.

Julie Mall and Stacey Earley have walked different paths, but each found their niche working in offshore environments, and encourage other women to do the same. There are a variety of career paths to choose from in maintenance, marine or drilling. Each one is rewarding, challenging and, frankly, an adventure.